Prospects of Increasing Geopolitical Risks and Its Solutions
－ How To Live in an Era of New Normal －
We organized a public symposium "Global Risk Symposium 2017".

The Japan Economic Foundation (JEF) was established in July 1981 to deepen mutual understanding between Japan and other countries through activities aimed at promoting economic and technological exchanges.

With this goal in mind, JEF engages in a broad range of activities; it provides information about Japan and arranges opportunities to exchange ideas among opinion leaders from many countries in such fields as industry, government administration, academia and politics in order to break down the barriers to mutual understanding. 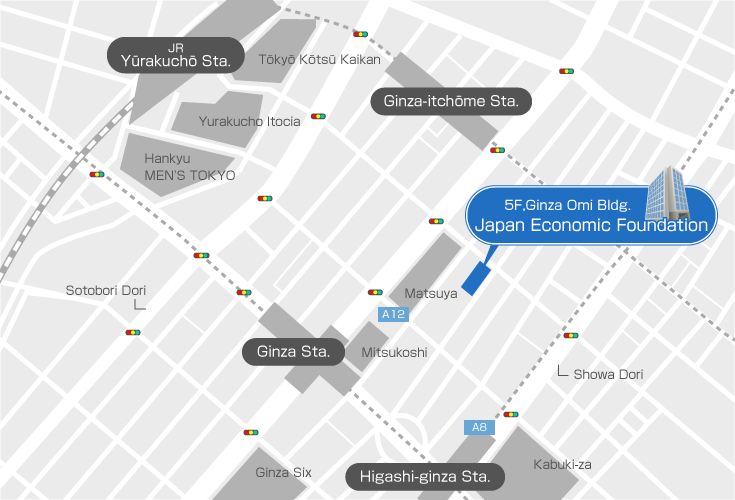 Publishing information about Japan
--Keeping the international community informed about the Japanese economy and developments in trade, industry and technology.

JEF would like to continue promoting mutual understanding between Japan and the rest of the world in economic and industrial fields through our international activities.

International Economic ForumsIt was meaningful attending JEF's forum because it was easy to understand the present situation and how the government, companies and universities are coping in a comprehensive way. (Manufacturer)

There were very helpful suggestions from both countries about the development of a cutting-edge technology. We would like to continue our participation. (Manufacturer)

JEF's forum is very valuable since there are only few chances for representatives of each sector of society to debate in person. The direct exchange of opinions is easy to understand. (Press)

Research Activities related to the International EconomyIt is a very interesting and profitable theme reflecting the recent trends. (Company)

We are distributing the research results to member companies to assist the further development of the industry. (Industry)

The JournalIt is amazing to know that such a prestigious magazine exists and circulates in Japan. (Press)

There is a wide range of authors and it can be said that this is the most interesting English magazine published in Japan. (Embassy staff)

It would be great if JEF could be distributed more widely in the Asian region. (Company/JETRO)

Some of the articles that appeared in the Journal have been used as supplementary texts at prestigious universitiesUniversity of California Los Angeles
University of South California University, etc.

Congratulatory MesseagesJEF marked its 20th anniversary on July 1, 2001.
These are some of the congratulatory messages we received from all over the world.

For 20 years, the Japan Economic Foundation has successfully developed fruitful relations with the rest of the world and greatly increased it's international influence. As the Chairman of the Institut Aspen France, I appreciate the high level of quality of our long lasting relationship with JEF. Since 1983, we have jointly organized seven Europe-Japan conferences which have brought a significant contribution to a better understanding between our two societies. On the occasion of it's 20th anniversary, I want to congratulate the Japan Economic Foundation and formulate my best wishes for the continuity of its development.

Director of the Royal Institute of International Affairs, UK

I have pleasure in congratulating the Japan Economic Foundation on its 20th anniversary. We in the Royal Institute of International Affairs first worked with JEF in 1986 with the creation of the UK-Japan High Technology Industry Forum, which is now in its 16th year. During that time we have brought high-level executives from both countries together on an annual basis, deepening understanding of each other's innovation systems. This kind of co-operation will be of continued importance in a period when Japan is trying to regain the economic dynamism that it lost with the collapse of the bubble economy. In this transitional period, the internationalist philosophy of the Japan Economic Foundation will continue to make you a valued partner for us.

Executive Director of Centre for Strategic and InternationalStudies, Jakarta, Indonesia

The Japan Economic Foundation is one of the "diamonds" of institutions, not only in Japan but also throughout the Asia Pacific region. It is at the forefront of Japan's internationalization effort. Through its many activities, JEF has contributed greatly to improving mutual understanding among the peoples of the region in general and amongst research institutions in particular. My institution and myself have benefited greatly from participating in the activities of JEF. This has helped widen our networks in the region. The many networks in the region are of critical importance to the development of a genuine sense of community in the region. I wish to express my congratulations in the Indonesian language, Selamat Ulang Tahun, and hope for many more years of great achievements by JEF that will contribute significantly to the betterment of the peoples in the Asia Pacific region and beyond.

The American Enterprise Institute extends congratulations to the Japan Economic Foundation on its twentieth anniversary. For well over half of those twenty years, JEF and AEI have met annually, and sometimes more frequently, in Tokyo and Washington to discuss economic, political, and security issues confronting Japan and America. It is our belief at AEI that those meetings have made a significant contribution to deepening the mutual understanding between our nations on important issues of public policy. We at AEI look forward to continuing our productive relationship with JEF.

I was privileged to participate in the 20th Japan Studies Program for International Executives (JASPIE), along with executives from 13 other countries. The curriculum provided participants with a wide variety of information about Japan's economy, politics and culture. Our group's activities ranged from lectures on doing business in Japan and new Japanese economic strategies, to discussions of the country's culture and history, as well as visits to plants and cultural sites in several cities. Two weeks is a short time to do more than scratch the surface of a country as rich in history and diverse in its economics and culture as Japan. However, participants in the 20th JASPIE returned home with a better sense of the challenges and opportunities of doing business in Japan. For two decades, JASPIE has promoted business and built bridges of understanding between Japan and the rest of the world. It offers a unique opportunity to study one of the most fascinating countries in the world.

JEF currently hosts four international forums where JEF identifies top priority issues and challenges common to Japan and other countries for sustainable and inclusive global growth and seeks solutions for them.

Through these Forums JEF provides venues for Japanese and foreign leaders from such fields as politics, governments, academia and business to discuss above-mentioned issues and solutions and to learn each other, and aims to come up with policy recommendations as a result of discussions.

SESSION 1 - FOSTERING YOUNG ENTREPRENEURS/ INNOVATIONKey questions-What are the reasons for success of young entrepreneurs / innovation?
-Any differences on this point between Europe and Japan?
-How can the regulatory, financial and educative environment support new entrepreneurs

SESSION 2 - BACK TO ECONOMIC GROWTH?Key questions-Are Abenomics and European Stability mechanisms and growth strategy a proper answer?
-How to cope with long-term issues such as ageing of the population, energy and environment inequalities to achieve sustainable growth?
-Can we consider Japan as a possible future for Europe?
-How to cope with the slowdown of the Chinese economy?

SESSION 3 - COOPERATION IN EMERGING COUNTRIESKey questions-How can developed countries help economic development in Africa?
-Challenges of the COP 21 decisions with respect to emerging markets
-What new business development models can we propose in emerging markets?

SESSION 4 - BACK TO NATIONALISM IN FAR EAST ASIA AND EUROPE?Key questions-What are the moves toward nationalism in Asia? in Europe?
-The challenge of China, ( f.i. the AIIB development)

The full text of a reportJEF - APARC Forum

JEF's activities "Japan-US Forum 2019" was subsidized by JKA through its Promotion funds from KEIRIN RACE.