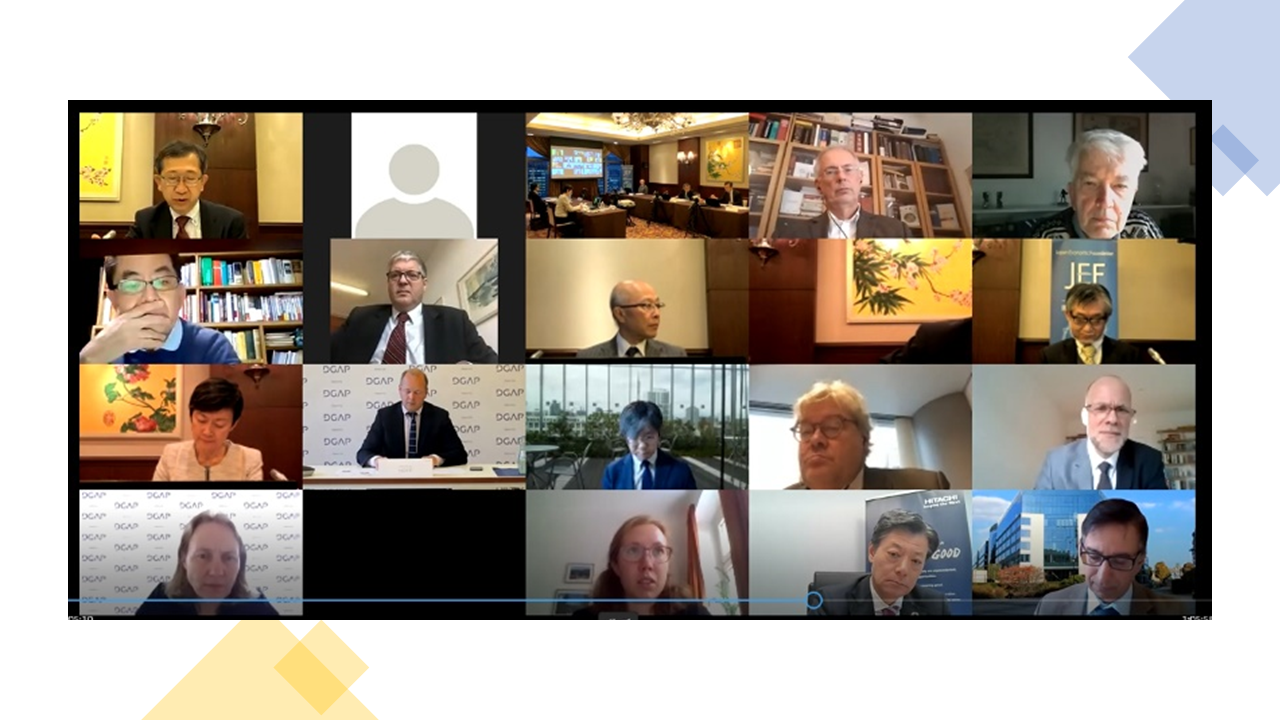 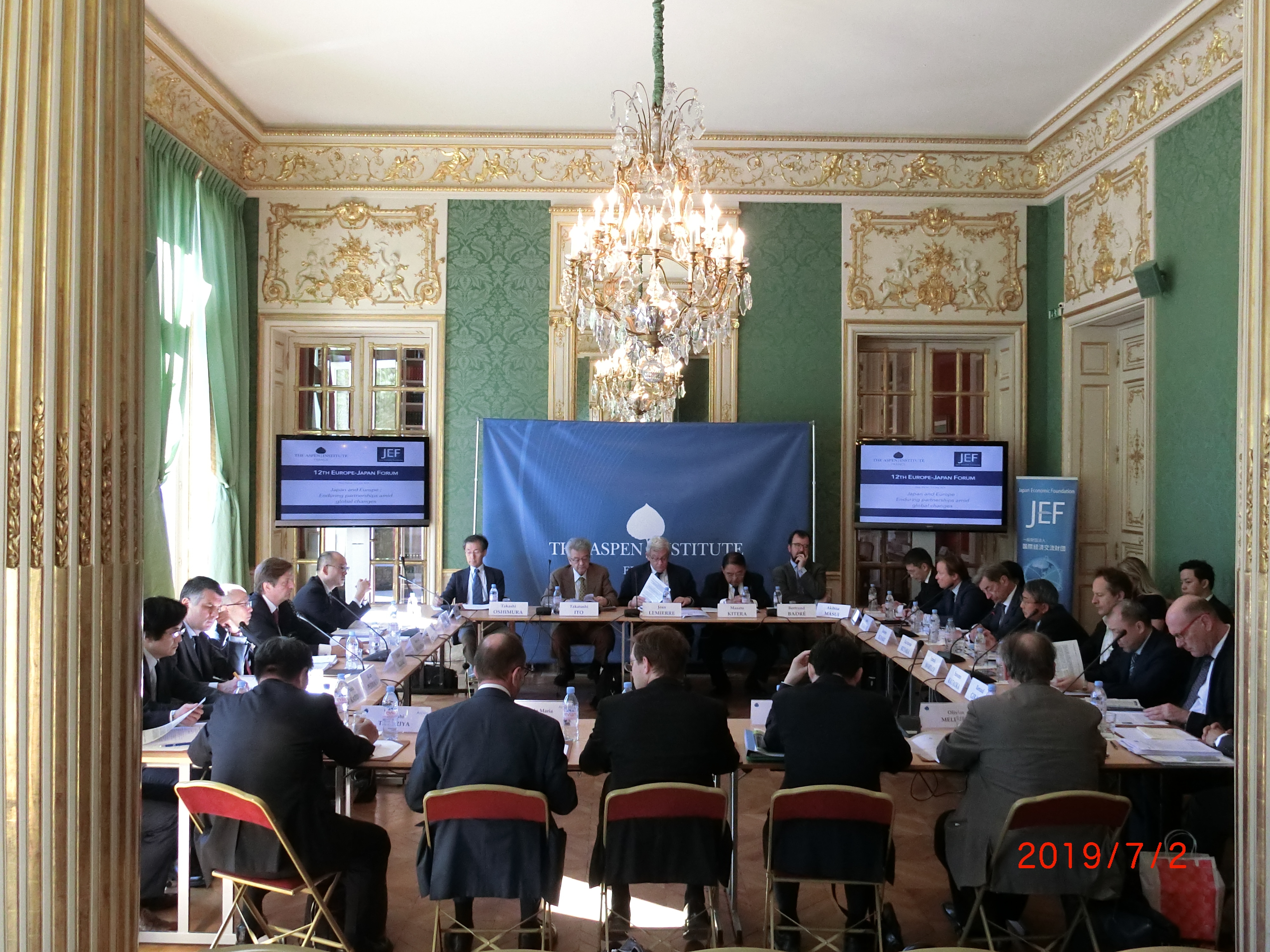 DateFriday, November 30, 2012
VenueThe Delegation of the European Union to Japan 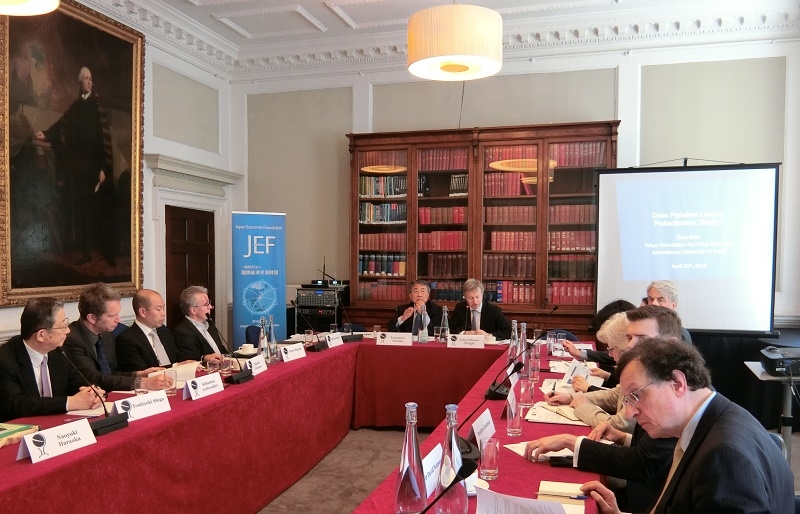 SESSION 1 - FOSTERING YOUNG ENTREPRENEURS/ INNOVATIONKey questions-What are the reasons for success of young entrepreneurs / innovation?
-Any differences on this point between Europe and Japan?
-How can the regulatory, financial and educative environment support new entrepreneurs

SESSION 2 - BACK TO ECONOMIC GROWTH?Key questions-Are Abenomics and European Stability mechanisms and growth strategy a proper answer?
-How to cope with long-term issues such as ageing of the population, energy and environment inequalities to achieve sustainable growth?
-Can we consider Japan as a possible future for Europe?
-How to cope with the slowdown of the Chinese economy?

SESSION 3 - COOPERATION IN EMERGING COUNTRIESKey questions-How can developed countries help economic development in Africa?
-Challenges of the COP 21 decisions with respect to emerging markets
-What new business development models can we propose in emerging markets?

SESSION 4 - BACK TO NATIONALISM IN FAR EAST ASIA AND EUROPE?Key questions-What are the moves toward nationalism in Asia? in Europe?
-The challenge of China, ( f.i. the AIIB development)

TopicsThe Political Economy of Japan and the EU:
Challenges and Strategies

SESSION 1: EU-Japan Trade and Economic Relationships-What are the prospects for a successful completion of an EU-Japan Free Trade Agreement (FTA) in 2015?
-What are the implications of this agreement economically both within Europe and Japan?
-How might success in the FTA talks foster a wider and more cooperative strategic partnership between Japan and the EU?

SESSION 2: Age, Gender & Migration: The Challenges of Demography-How have Japan and EU member countries responded to the challenge of aging and gender inequality and what lessons can be learnt from their respective experiences in promoting greater social cohesion and labour flexibility?
-What are the benefits and challenges to Europe and Japan from increasing migration, whether regulated or unregulated?

SESSION 3: Energy & the Environment: Is a Green Future Possible?-What has been the role of national governments in Europe and Japan in mitigating climate change?
-What are the prospects for and obstacles to the reactivation of Japan's nuclear reactors?
-How have technological advances helped to enhance Japan's ability to manage the challenge of global climate change?

SESSION 4: Local government and New Models of Political Accountability-How have the triple disasters of 3/11 influenced the role of local government in Japan, both in limiting the power of central government and in providing localized solutions to particular policy problems?
-Is Japan turning inwards and embracing a new model of 'slow economic growth'? What are the costs and benefits of such a change?
-What do the experiences of Europe and Japan suggest are the benefits of greater political devolution?

TopicsThe 2nd JEF-DGAP International Conference
"How to get out of the crisis? Different approaches in Japan and the EU towards growth"

10:30-12:00am SESSION 1: MACRO-ECONOMIC POLICY"Abenomics" and Austerity Policy as a way towards Growth

*What are the lessons from the Eurocrisis? How are European countries going to manage this challenge?
*Assessment of Abenomics: what are the major effects witnessed so far and what should we expect?
*What kind of structural reforms are required in both Japan and Europe?

*Energy and environment: What kind of impact will the US's strive for energy independency (thanks to the shale gas revolution) have on both "energy consuming" and "energy exporting" countries?
*Ageing Society: Is an ageing society an opportunity or an impediment for sustainable economic growth?

Moderator:
Mr. Nicolas TENZER, Member of the Managing Board of Aspen Institute France, and President of the Initiative for the Development of French Expertise

Mr. Patrick AUBERT, General Secretary of the French Pensions Advisory Council
"Reforming the French pension system in the context of an ageing society"

Session 1: Economic Integration between Asia and Europe: Opportunities and Challenges*The negotiations for an EU-Japan FTA
*Is further integration with East-Asian countries possible?
*The role of China and its relationship with Japan

Session 2: Regional and International Coordination of Monetary Policies*Should Asia move towards a coordination of exchange rate policies, in the sense of collective currency appreciation vis-à-vis the USD?
*What are the regional implications of the increased regional use of the Chinese RMB?
*What are the future prospects for the role of the Japanese yen?

Chair:
Yosuke Kawakami, Minister for Financial Affairs, Embassy of Japan in the UK

Keynote 3: "Achieving Sustainable Growth Paths in the EU"Moreno Bertoldi, Head of the Unit for Countries of the G-20, Directorate-General for Economic and Financial Affairs, European Commission
Presentation

SESSION 2: THE NUCLEAR INCIDENT IN FUKUSHIMA: CONSEQUENCES FOR THE ENERGY MIX IN GERMANY AND JAPANSpeakers:
Nobuo Tanaka, Global Associate for Energy Security and Sustainability, The Institute of Energy Economics, Japan; Former Executive Director of the International Energy Agency (IEA)
Presentation

SESSION 3: HOW JAPAN AND GERMANY CAN COOPERATE TO BUILD UP A COMMON FRAMEWORK TO ADDRESS THE ISSUE OF GLOBAL CLIMATE CHANGE?Speakers:
Amb. Mutsuyoshi Nishimura, Visiting Fellow at Japan Institute for International Affairs (JIIA); Former Special Advisor to the Cabinet, in charge of Climate change; Former Ambassador in charge of for Global Environment and Chief Climate Negotiator in Japan; Former Ambassador to OECD and to Mexico
Paper
Paper

Topics"Is the world economy's recovery sustainable? A viewpoint from Europe and Japan"

Japan and Europe as mature economies in a changing world
- How can Europe and Japan build a new competitive edge based on innovation to enhance their growth potential?
- What can be said of consumer habits in Japan and Europe, not only as drivers for future market growth, but also as reflection of similar cultural patterns?
Moderator: Mr. Raphaël Hadas-Lebel, President of Pensions Advisory Council (Conseil d'orientation des retraites, Paris) and Vice-President of the Advisory Board of Institut Aspen France
Speakers (7 minutes each)
Europe: Mr. Jean-Pierre Duprieu, Member of the General Management of Air Liquide Group;
Mr. Mineaki Saito, Executive Vice President of Hermès International, in charge of Marketing
Japan : Mr. Naoyuki Haraoka, Executive Managing Director, Japan Economic Foundation (JEF)

Panel Discussion 2: What does the future look like in the post-crisis world economy?Naohiro Yashiro, Professor, International Christian University

It is my great pleasure and honor to welcome all of you to the JEF-Chatham House Symposium "The Post-crisis Landscape for International Financial Centers-Sink or Swim?"

Just two years ago, Japan Economic Foundation and Chatham House co-organized the workshop focusing on the rise of China and India and Its impact on Japan, UK and world economy. In the same year JEF invited Dr. Robin Niblette the director of Chatham House to Japan and organized an international symposium in Tokyo, entitled "New age for Asia-Europe relations."

The relation between JEF and Chatham House started back in 1986 when Japan- UK High Technology Industry Forum was held for the first time. In these 20 or so years, JEF had been the constant organizer for Japan side. British side was represented by Chatham House at early stage and APTN (Asia-Pacific Technology Network) which spun out from Chatham House succeeded that role at later stage.

Now this time, we agreed to co-host this very important symposium focusing on the current financial turmoil and its implication to International Financial Centers.

Prior to this symposium, JEF and Chatham House jointly held research workshop in November last year in Tokyo aiming at exploring Tokyo' s competitiveness as an international financial center. We had a very interesting discussion on whether Tokyo can weather the storm.

Last December JEF held Japan-US Conference with an American law firm in Washington D.C. on Japan-US relationship; "New Challenges, New Opportunities for New Administration." Based on the discussion, we concluded a Joint Action Agenda which included issues on economy, trade and climate change.
We also dealt with the current financial crisis and argued that many of the current problems were foreseeable and there needed to be a full-scale efforts by officials and experts from the US, Japan and Europe to investigate the problems and make necessary corrections. In the light of this, we suggested that the establishment of a US-Japan-European Union Trilateral discussion forum would be beneficial, aiming at collaboration on how financial markets and corporate governance need to be improved.
In addition to this, our suggestions included following points:

I hope that at this symposium we will discuss those issues in addition to the international financial center issues.

On this note, I would like to take this opportunity to express my heartfelt gratitude to Dr. John Llewellyn, Dr. Paola Subacchi all distinguished speakers and the panelists and other participants for joining this symposium.

Finally, I would also like to thank all staff of Chatham House, which has greatly contributed to this symposium. I wish all of you an interesting and fruitful discussion.

Thank you very much.

It is my great honor and privilege to welcome all of you to the International Symposium, "Possibility of an FTA between the Arab Maghreb Union Countries and Japan" h, co-hosted by Tunisian Agency for Technical Cooperation(ATCT) and Arab Institute of Business Managers(IACE).

Japan has celebrated the 50th anniversary of the establishment of diplomatic relations with Tunisia and Morocco in 2006 and with Libya in 2007. This has led Japan to recognize the deepening its relationship with these countries from the viewpoint of promoting Middle East and African policies.

Talking about Japan's FTA policy, Japan has, to date, signed bilateral FTAs with East Asian countries such as Singapore, Malaysia, Thailand, the Philippines, and Indonesia. In addition, Japan has also signed a Sub-Regional FTA with ASEAN. Japan has also concluded FTAs with Mexico and Chile, and is pursuing FTA negotiations with Switzerland and Australia.

But Japan has not concluded nor even negotiated FTAs with any of African countries yet although Past TICADs have included talks on various plans to facilitate the development of Africa through the promotion of investment and trade between Asia and Africa.

Under those circumstances, I strongly believe that it is worth discussing "the possibility of Japan-Arab Magfreb Union countries FTA" if we take it into account that Japan is currently in complementary relationships with those countries.

As a series of JEF's projects to deepen mutual understanding between Japan and other countries through activities aimed at promoting economic and technological exchange, JEF has organized the International Symposium in various cities in Asia, US and Europe mainly focusing on a region-wide or bilateral FTA.

Now, this time, we have chosen Tunis as the venue for the symposium, mainly because Tunisia is sort of FTA hub in this region.

I hope that this symposium will discuss those issues I mentioned above, including economic relationships, exchange of experiences EPA/FTA, Feasibility of an EPA/FTA between Japan and Arab Maghreb Union countries.

On this note, I would like to take this opportunity to express my heartfelt gratitude to Mr. Amor Jilani, Mr. Chekib Nouira, all distinguished speakers and the panelists and you, the participants for making this symposium realized.

In particular, I would like to express my sincere appreciation to my longtime friend, Mr. Salah Hannachi, former Ambassador to Japan for delivering the keynote speech immediately after my remarks. I sincerely feel grateful that he accepted our invitation.

Finally, I would also like to thank all staff of ATCT and IACE which has greatly contributed to this symposium. I wish all of you an interesting and fruitful discussion.

Thank you very much.